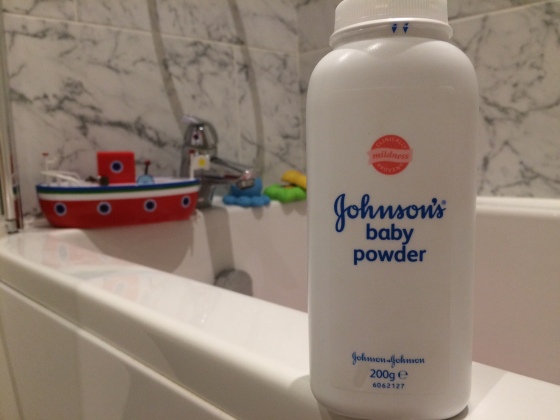 When I look at the ingredients of some of the most well-known products, it’s always surprising to see them listed in their vastness, but never as much as it is to see them so minimal. Maybe it’s the cynic in me, but when some of them have just 4 or 5 ingredients and shout from the roof about being all-singing and all natural after years of being one of the naughty boys, a little bit of knowledge and digging usually reveals that one ingredient is a cacophony of chemical crap.

More often than not, a single ingredient can be a combination of so many other chemicals and preservatives and then labelled as just one thing. So you can imagine my reaction at reading the back of Johnson’s Baby Powder to then find that just two ingredients make up that sweet-smelling and bottom-bitingly good powder fluff that we so regularly sprinkle over our children.

If you’ve been living in a bubble for the past few weeks or enjoy a blissfully unaware life where media intervention is none of your concern, then the news that Johnson and Johnson are being forced into paying a whopping $72 million to the bereaved family of a Cancer victim, will be a bit of a surprise! Jacqueline Fox sadly lost her life to Ovarian Cancer at the age of 62 and her death was linked to her daily use of Johnson’s popular baby powder. Part of a wider law suit involving many others, her son took over proceedings after his mothers death and was recently awarded significant damages after a Missouri judge ruled in their favour.

But the most shocking part of all of this is that Johnson and Johnson have known about the risks posed by their products for decades yet failed in mega proportions by not letting consumers know exactly what they were risking their babies lives with. This got me thinking about those single ingredients like they so often have done.

Johnson’s lists just two ingredients in their baby powder; Talc and Parfum. Parfum alone is a dubious one that always manages to cover up the truth. Parfum is in other terms just fragrance, but what contributes to that fragrance can be a combination of things such as essential oils and synthetic smells which may be deemed ‘safe’ for human contact. However, behind the pretty name, Parfum hides a multitude of sins and hundreds of chemicals and known nasties can legally fall under its label without having to be transparent and reveal what they actually are. Originally used as a smokescreen for cosmetic companies to hide their secret fragrance blends, the term ‘taking the piss’ springs to mind these days as more and more hide their blend of body and soul destroying rubbish under a single word. Think irritants, inflammation and allergens… it’s not pretty. 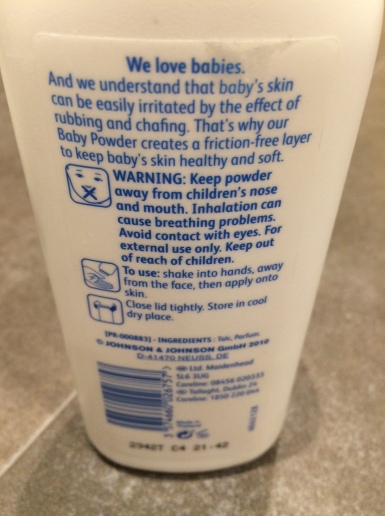 Talc is another of the ingredients found in Johnson’s Baby Powder and in some ways could be considered as natures way of saying ‘stay away’. Talc is a mineral rock combination of Magnesium, Silicon and Oxygen, and in its natural form contains Asbestos – Nice! But although talcum powder is legally required to be free of Asbestos, very small fibres do still exist and cannot all be removed. In its powder form it is easily inhaled and can worm its way into the areas that you really don’t want it to reach. Which is why it is so unbelievably disgusting that Johnson and Johnson have let parents use their products on their most precious little darlings without informing them of the risks involved for such an alarmingly long time.

But how is it actually damaging our children and ourselves? It’s somewhat far fetched to think that a tiny puff of this powder can make such a difference, but when combined over years of use, the travelling fibres of the powder find their way to the ovaries and do their damage there. The warning on the back of the powder bottle tells us that inhalation can cause breathing problems in babies but nowhere does it say that prolonged use may increase your risk of Ovarian Cancer by as much as 30%.

So this brings me back to the beginning of my chemical free journey, and one of the reasons why I started to look at eliminating this rubbish from my home. For years we’ve trusted that science and cosmetic companies would offer us the best for our newborn babies and why wouldn’t we? We should expect that they would give us the means to clean and care for our babies without having to worry about their future health and safety. Is it too much to ask that cosmetics are clearer and cleaner? I don’t think so. Until the truth is completely out there and these companies are forced into saying goodbye to all of the man made additives that are simply unnecessary, then I’ll continue to use natural and kinder alternatives to what we’ve been misled into believing is ‘normal’.

Keep Up To Date

Keep Up To Date